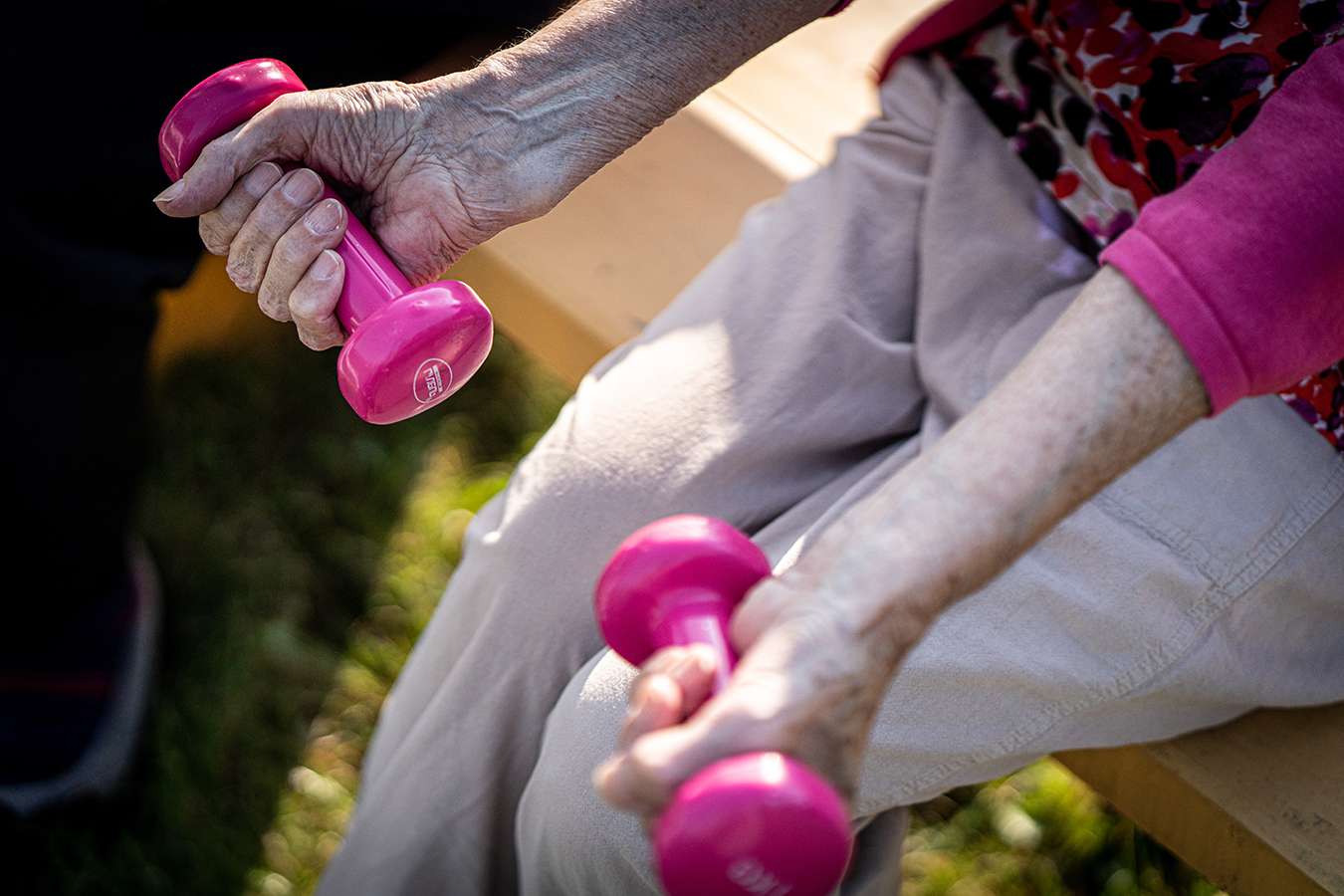 Ronald Lindquist, 87, has been active all his life. So, he wasn’t prepared for what happened when he stopped going out during the coronavirus pandemic and spent most of his time, inactive, at home.

“I found it hard to get up and get out of bed,” said Lindquist, who lives with his wife of 67 years in Palm Springs, California. “I just wanted to lay around. I lost my desire to do things.”

Physically, Lindquist noticed that getting up out of a chair was difficult, as was getting into and out of his car. “I was praying ‘Lord, give me some strength.’ I kind of felt, I’m on my way out — I’m not going to make it,” he admitted.

One little-discussed, long-term toll of the pandemic: Large numbers of older adults have become physically and cognitively debilitated and less able to care for themselves during 15 months of sheltering in place.

No large-scale studies have documented the extent of this phenomenon. But physicians, physical therapists and health plan leaders said the prospect of increased impairment and frailty in the older population is a growing concern.

“Anyone who cares for older adults has seen a significant decline in functioning as people have been less active,” said Dr. Jonathan Bean, an expert in geriatric rehabilitation and director of the New England Geriatric Research, Education and Clinical Center at the Veterans Affairs Boston Healthcare System.

Bean’s 90-year-old mother, who lives in an assisted living facility, is a case in point. Before the pandemic, she could walk with a walker, engage in conversation and manage going to the bathroom. Now, she depends on a wheelchair and “her dementia has rapidly accelerated — she can’t really care for herself,” the doctor said.

Bean said his mother is no longer able to benefit from rehabilitative therapies. But many older adults might be able to realize improvements if given proper attention.

“Immobility and debility are outcomes to this horrific pandemic that people aren’t even talking about yet,” said Linda Teodosio, a physical therapist and division rehabilitation manager in Bayada Home Health Care’s Towson, Maryland, office. “What I’d love to see is a national effort, maybe by the CDC [U.S. Centers for Disease Control and Prevention], focused on helping older people overcome these kinds of impairments.”

The extent of the need is substantial, by many accounts. Teodosio said she and her staff have seen a “tremendous increase” in falls and in the exacerbation of chronic illnesses such as diabetes, congestive heart failure and chronic obstructive pulmonary disease.

“Older adults got off schedule during the pandemic,” she explained, and “they didn’t eat well, they didn’t hydrate properly, they didn’t move, they got weaker.”

Dr. Lauren Jan Gleason, a geriatrician and assistant professor of medicine at the University of Chicago, said many older patients have lost muscle mass and strength this past year and are having difficulties with mobility and balance they didn’t have previously.

Mary Louise Amilicia, 67, of East Meadow, New York, put on more than 100 pounds while staying at home round-the-clock and taking care of her husband Frank, 69, who was hospitalized with a severe case of covid-19 in early December. While Amilicia also tested positive for the virus, she had a mild case.

“We were in the house every day 24/7, except when we had to go to the doctor, and when he got sick I had to do all the stuff he used to do,” Amilicia told me. “It was a lot of stress. I just began eating everything in sight and not taking care of myself.”

The extra weight made it hard to move around, and Amilicia fell several times after Christmas, fortunately without sustaining serious injuries.

After coming home from the hospital, Frank couldn’t get out of a chair, walk 10 feet to the bathroom or climb the stairs in his house. Instead, he spent most of the day in a recliner, relying on his wife for help.

Now, the couple is getting physical therapy from Northwell Health, New York state’s largest health care system. Just before the pandemic, Northwell launched a “rehabilitation at home” program for patients who otherwise would have seen therapists in outpatient facilities. (Medicare Part B pays for the treatments.)

Frank Amilicia was hospitalized with a severe case of covid last December. When he returned home, he was confined to his recliner, relying on his wife, Mary Louise, for help. Mary Louise put on extra weight while taking care of Frank and fell several times after Christmas. Now, the couple is getting physical therapy from Northwell Health, New York state’s largest health care system. (Saaba Mundia)

The program is serving more than 100 patients on Long Island, in Westchester County and in parts of New York City. “The demand is very strong and we’re in the process of hiring another 20 therapists,” said Nina DePaola, Northwell’s vice president of post-acute services.

Sabaa Mundia, a physical therapist working with the Amilicias, said Mary Louise can walk up to 400 feet without a walker, after doing strengthening exercises twice a week over the course of three weeks. Frank had been using a wheelchair and is now regularly walking 150 feet with a walker after more than a month of therapy.

“Older adults can lose about 20% of their muscle mass if they don’t walk for up to five days,” Mundia said. “And their endurance decreases, their stamina decreases, and their range of motion decreases.”

Recognizing that risk, some health plans have been reaching out to older members to assess how they’re faring. In Massachusetts, Commonwealth Care Alliance serves more than 10,000 older adults who are poor and eligible for both Medicare and Medicaid, the federal-state program for people with low incomes. On average, they tend to have more medical needs than similarly aged seniors.

Between March and September last year, the plan’s staffers conducted “wellness outreach assessments” by phone every two weeks, asking about ongoing medical care, new physical and emotional challenges, and the adequacy of available help, among other concerns. Today, calls are made monthly and staffers have resumed seeing members in person.

An increase in physical deconditioning is one of the big issues that have emerged. “We’ve had physical therapists digitally engage with members to coach them through strength and balance training,” said Dr. Robert MacArthur, a geriatrician and Commonwealth Care’s chief medical officer. “And when that didn’t work, we sent therapists into people’s homes.”

Another SCAN program, Member2Member, pairs older adult “peer health advocates” with members who have noted physical or emotional difficulties on health risk assessments. That’s how Lindquist in Palm Springs connected with Jerry Payne, 79, a peer advocate who calls him regularly and helped him come up with a plan to emerge from his pandemic-induced funk.

“First, he said, ‘Ron, you should try getting up every hour and taking a few steps’ — that was the start of it,” Lindquist told me. “Then, he’d suggest walking another block when I would take my dog out. It was painful. Walking was not pleasant. But he was very encouraging.”

A month ago, Payne had a Fitbit sent to Lindquist. At first, Lindquist walked about 1,500 steps a day; now, he’s up to more than 5,000 steps a day and has a goal of reaching 10,000 steps. “I’m sleeping better and I feel so much better all around,” Lindquist said. “My whole attitude and physicality has changed. I tell you, this has been an answer to my prayers.”

Coming Monday: Tips for Older Adults to Regain Their Game

We’re eager to hear from readers about questions you’d like answered, problems you’ve been having with your care and advice you need in dealing with the health care system. Visit khn.org/columnists to submit your requests or tips.