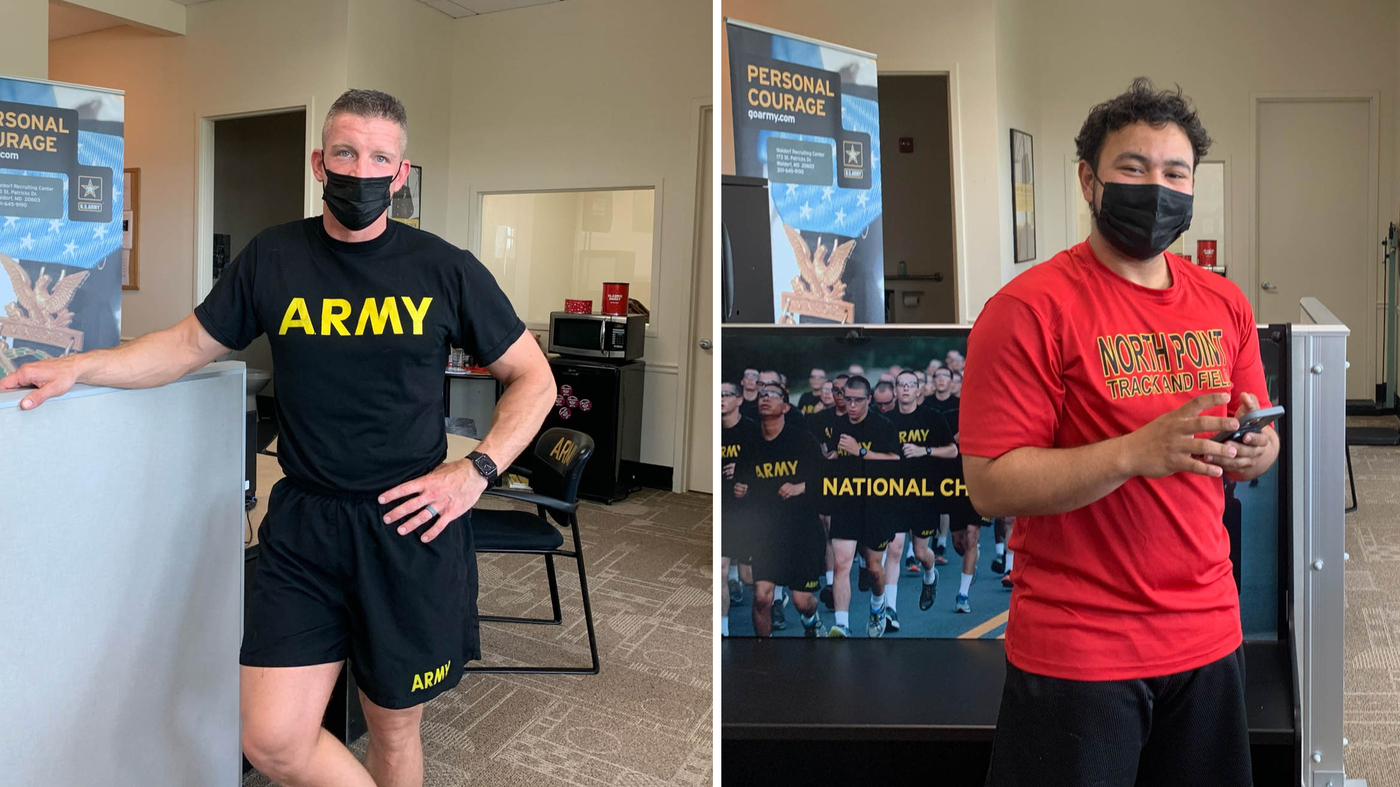 Marcus Robinson (center) wanted to enlist in the Army but was too heavy to qualify for the military’s fitness standards. So he started to get in shape — showing up at the Army’s recruitment office in Waldorf, Md., for weekly workouts in the parking lot. 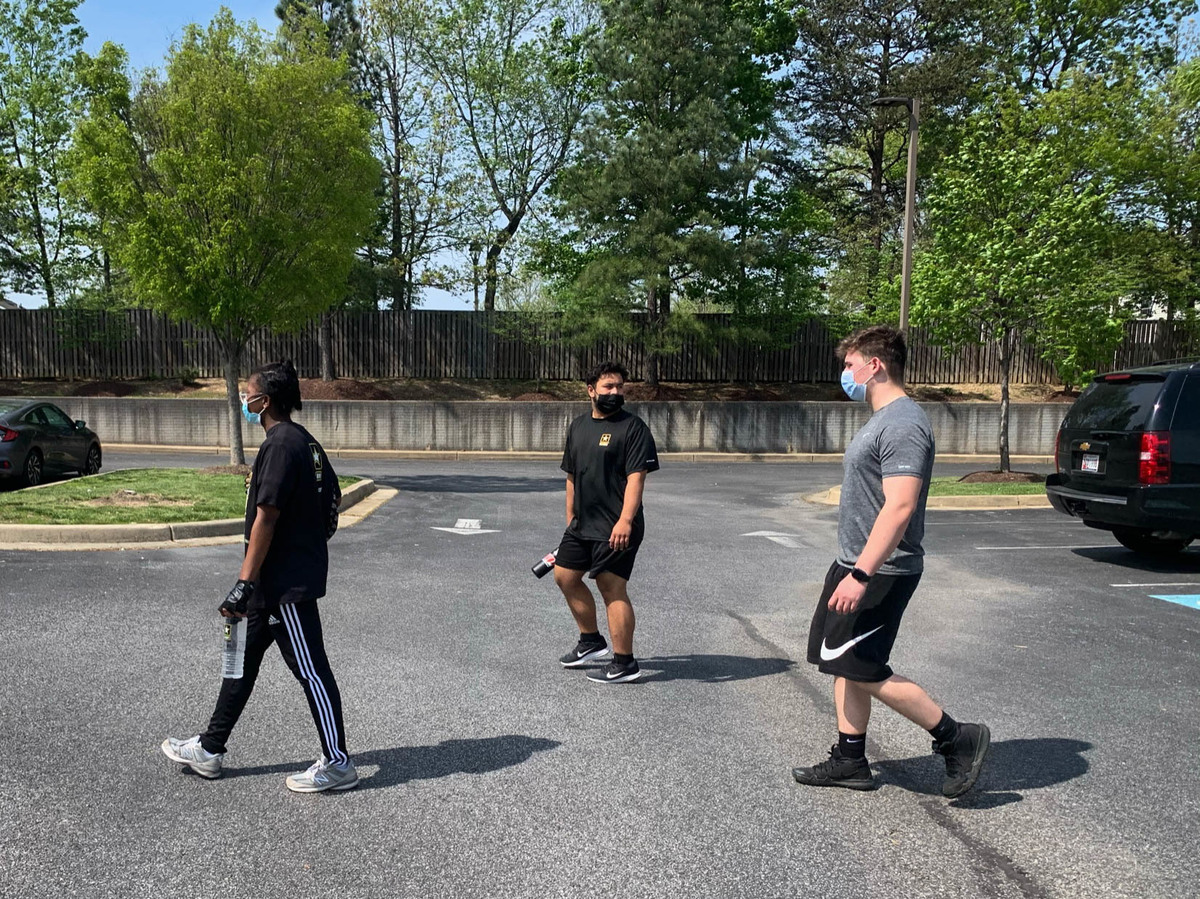 Marcus Robinson (center) wanted to enlist in the Army but was too heavy to qualify for the military’s fitness standards. So he started to get in shape — showing up at the Army’s recruitment office in Waldorf, Md., for weekly workouts in the parking lot.

Marcus Robinson wanted to follow the older brother he idolizes into military life. He also needed the Army benefits to help pay for college. “I had to do it because I didn’t want my parents to worry about paying for school,” the 18-year-old says.

But last year — mid-way through his senior year of high school — Robinson tipped the scales at 240 pounds, making him too heavy to qualify under the U.S. Army’s fitness standards.

“I would look at pictures of myself and I would get upset,” Robinson says. Repeated attempts to lose weight on his own didn’t work. House-bound pandemic life and his summer job at an ice cream parlor added still more pounds.

An increasing percentage of young people face that same problem. Across all segments of the military, 31% percent of young adults ages 17 to 24 cannot enlist because they’re too heavy, according to the Department of Defense. The Army, the military’s largest branch, needs to recruit about 130,000 people a year to carry out its missions, and therefore faces the brunt of the recruitment challenge that childhood obesity presents.

In response, about a decade ago individual recruiters around the country started identifying and working with potential recruits who need to lose dozens of pounds or more to qualify for military service. It isn’t part of an official Army-sponsored program; many recruiters simply recognized it was necessary for them to mentor individuals in weight loss in order to meet their own enlistment goals.

“You’re even recruiting in a population that is obese,” because the condition is so prevalent, says retired Maj. Gen. Malcolm Frost, who served 35 years in the Army and is a member of Mission Readiness, a nonprofit group focused on preparing young people for service. “That’s what our recruiters around the nation are dealing with.” 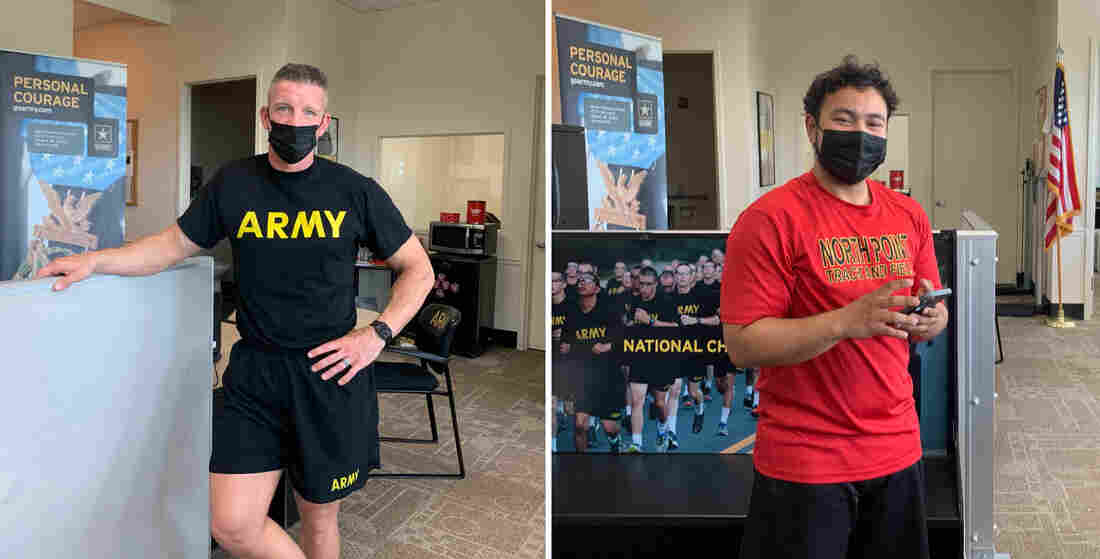 (Left) Staff Sgt. Stephen Ahlstrom, an Army recruiter, has been mentoring potential recruits in weight loss in order to meet his own enlistment goals. This work he does with young people, like Marcus Robinson (right), is not part of an official military program. 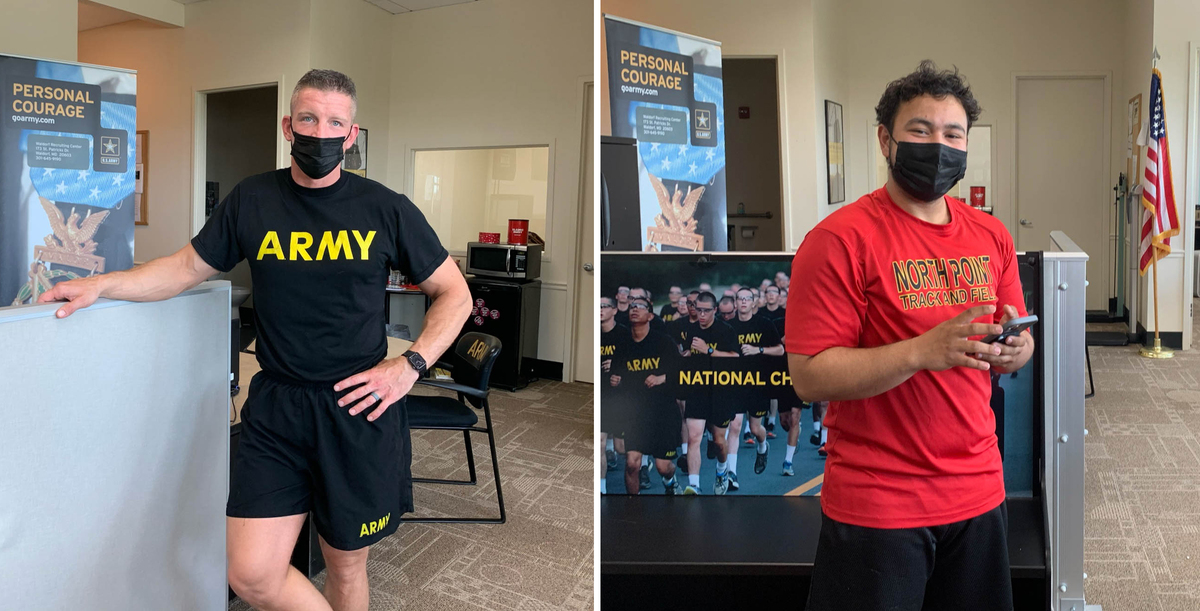 (Left) Staff Sgt. Stephen Ahlstrom, an Army recruiter, has been mentoring potential recruits in weight loss in order to meet his own enlistment goals. This work he does with young people, like Marcus Robinson (right), is not part of an official military program.

Plus, the military has long recruited most heavily from Southern states, he adds, where obesity rates run even higher.

Frost says rising childhood obesity rates in the U.S. also are of concern to top military brass, who have largely focused their support on prevention programs — advocating for food subsidies to low-income families to ensure basic nutrition, for example.

But addressing obesity in older children and teens, once it’s already set in, is notoriously difficult. Many factors that perpetuate it are beyond a recruiter’s control — things like low family income or having little access to healthy food. Those problems have only intensified during the pandemic.

All those issues feed bigger worries about the sustainability of the country’s military, Frost notes. “In a generation or two, this is going to be a potential existential threat to our nation,” he says.

Powerful forces like food insecurity and the ways cheap, high-calorie junk food is heavily marketed add to the challenge, says Jeffrey Snow, another retired major general who headed recruitment for the Army and Army Reserves until three years ago. In his military days, Snow says, he routinely talked about the significance of obesity prevention and mitigation, both inside and outside the Army.

“It’s a wicked problem,” he says, adding that he’d spent years “talking myself blue in the face,” but without much success. “I can’t even tell you that I had an impact on this issue.”

But recruiters’ grassroots efforts do make a difference, Snow says, for those individuals able to lose enough weight to meet the Army’s standard — a number he estimates to be about 1,000 to 2,000 people a year.

“For those young men and women who were able to join, I can tell you it changed their life,” he says.

That’s certainly the case for recruit Marcus Robinson, who started showing up at the Army’s recruitment office in Waldorf, Md., for weekly workouts in the parking lot outside.

One recent Wednesday, Robinson showed up with a water bottle and wearing his high school’s track and field jersey. He and about 15 other recruits soon found themselves sweating their way through a 90-minute workout involving repetitions of squats, pushups and laps around the lot.

Every week, before these workouts, Robinson steps on a scale and gets his neck and waist measured. 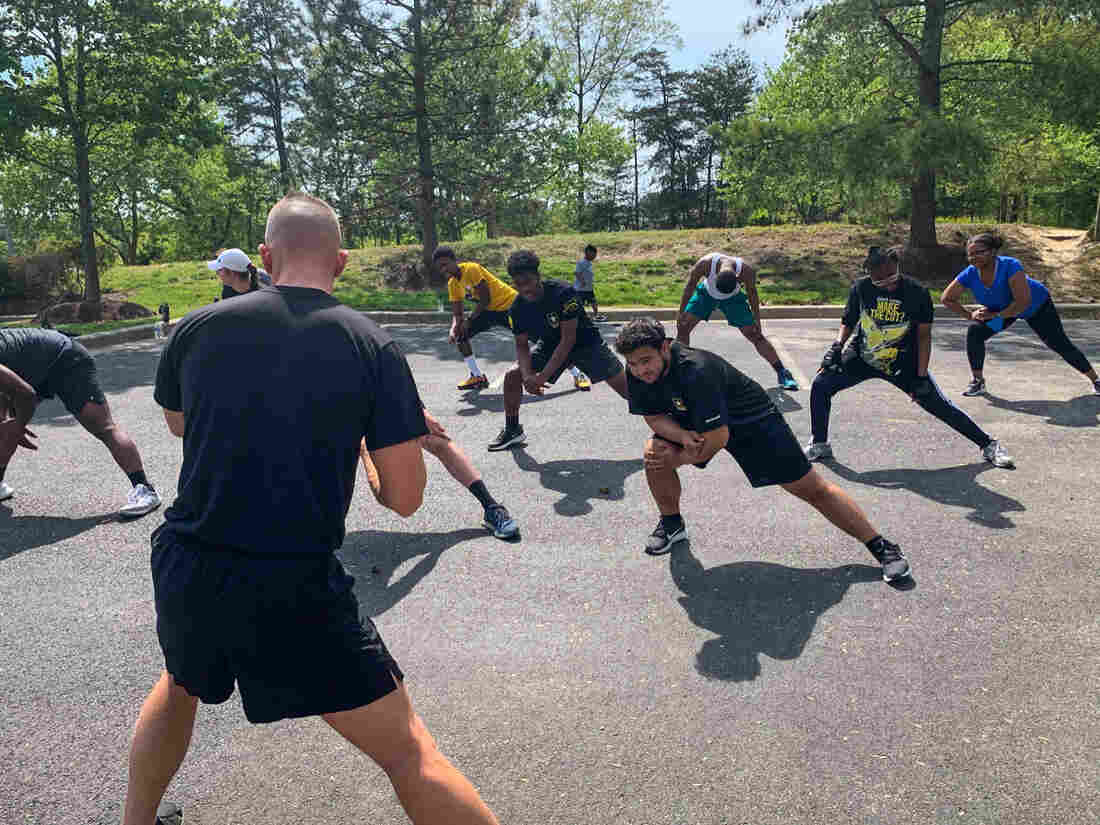 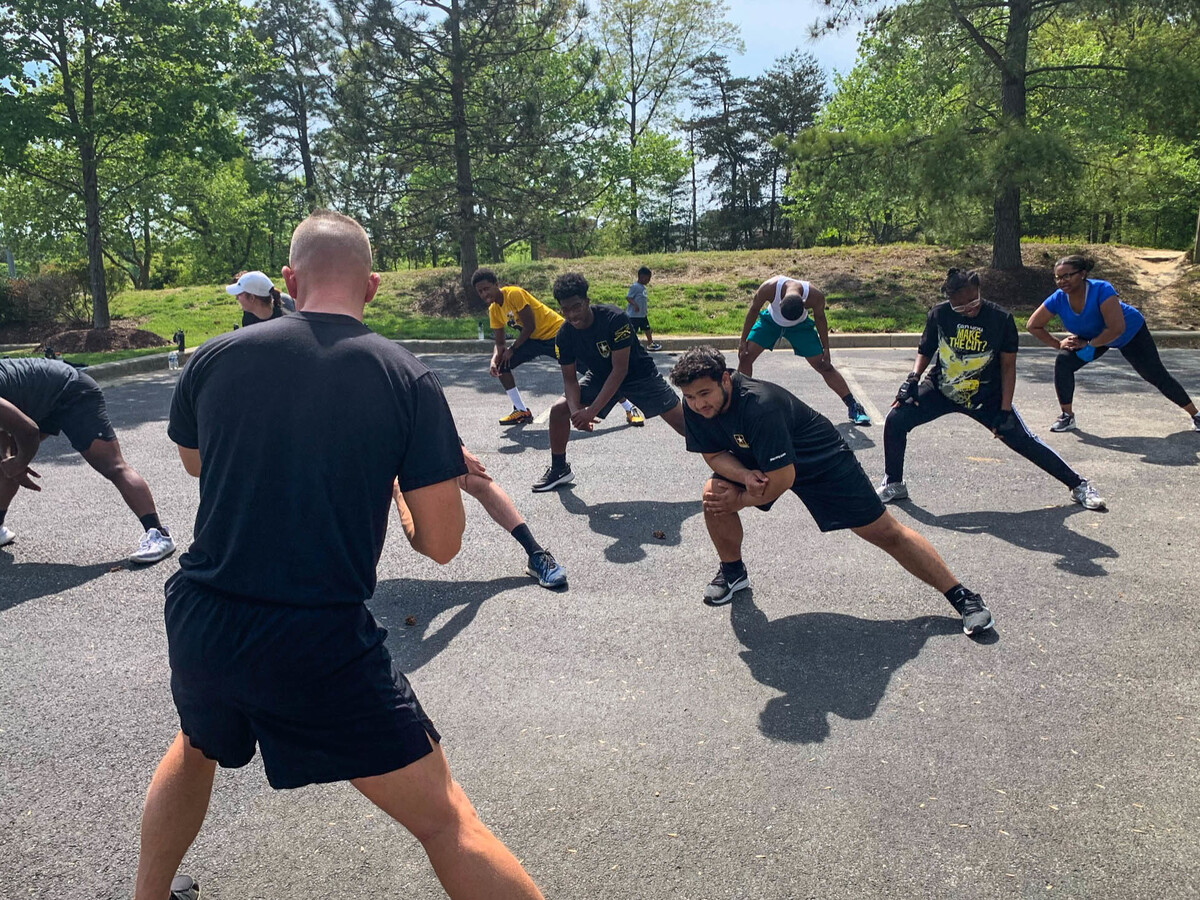 The first time he did so last year, he says, he was told he had to lose 10 inches around his waist. “It was a big number,” Robinson says. “Every time I came in, I was like, ‘Hey can you measure me,’ ” and over many months, that number started to go down.

It is an ongoing struggle.

“Eating is a mental challenge,” Robinson says. Many things test his resolve, such as comparing himself to men with tight abs, or being too tired to work out. Sometimes he calls off his diet of lean meats and vegetables. But he keeps in close contact with his recruiter Staff Sgt. Stephen Ahlstrom, who helps serve as Robinson’s backstop.

“One Wednesday, he wasn’t performing as well and it’s because of his diet,” Ahlstrom says.

Robinson recalls that incident: “I came in late and I was talking to him about how I felt and he just got me back on track.”

Ahlstrom gets Robinson back on track by reminding him of the specifics of better health: Drink a gallon of water a day, avoid the fast food drive-through, work out regularly. Ahlstrom also recommends setting a “cheat day” once a week for indulging in a junk food treat, as a reward for sticking to a lighter diet the rest of the time. Ahlstrom says he personally spends much of the week anticipating the double cheeseburger he allows himself on Friday nights.

“Saturday nights are definitely my cheat day,” Robinson says. But also, he says, eating healthier has changed his taste for food. “Once you start drinking water, soda tastes disgusting.”

Teaching this level of personal change is hard work, considering — again — this isn’t an official Army program, and success is far from guaranteed. Ahlstrom, for example, sometimes picks up potential recruits at home and drives them to workouts.

“It’s hard, because your mind is going to quit before your body does,” Ahlstrom says, so keeping the motivation of those he mentors high is critical. For some individuals, it may take years to lose the weight. And he knows some will drop out.

But there are inspiring examples of success. Last year, for example, Ahlstrom helped another young man lose 100 pounds to successfully enlist. Robinson, he says, showed the same level of commitment to hard work.

By March of this year, Robinson had shed 65 pounds. He was finally able to enlist and starts basic Army training this month.

“We did it. We’re here,” Robinson says, beaming victoriously, as Ahlstrom looks on, nodding.