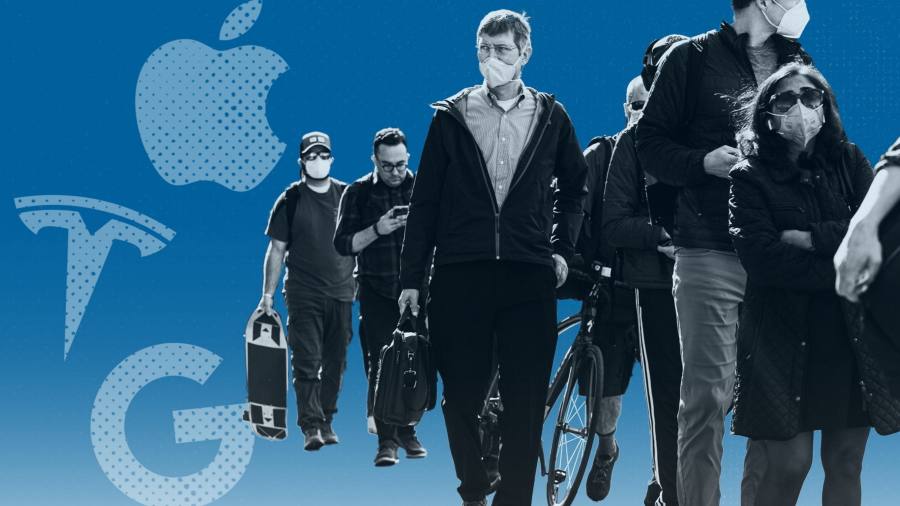 When Tim Cook sent his workforce home in March 2020, calling coronavirus a “challenging moment”, it is unlikely the Apple chief executive anticipated that he would have a battle on his hands to get those workers back to the office two and a half years later.

It took just a few days for Apple’s employees to hit out against the tech giant’s demand for staff to return three days a week from September. A group calling itself AppleTogether warned on Monday there should be no “uniform mandate from senior leadership”, while a Slack channel advocating for remote work at Apple has grown to 10,000 members.

The move by Apple, a bellwether of Silicon Valley, has led to growing disquiet across tech workers on whether their company will follow. While Big Tech companies were quick to send their workers home at the onset of the pandemic, the sector has been markedly less decisive in calling everybody back over concerns it could trigger an exodus of top talent.

“There is some palpable anxiety,” said one hardware engineer at the iPhone maker, who asked to remain anonymous. “Apple is working from a place of hubris in believing that it’s a desirable place to work and there’ll always be people who will want to work for Apple regardless of the conditions.”

Some workers have been emboldened by the tight labour market, which has boosted demand for highly-sought after tech jobs. Figures from Morning Consult, the data analytics group, suggest around half of all tech workers were fully remote by 2022, with most showing no interest in a full-time return.

These frictions have led to a stark contrast in how Silicon Valley’s tech companies view the future of working.

Apple’s Cook insists collaboration is best done in person and that the company’s culture and creative advantage would wilt with a distanced and isolated workforce.

While Apple was delicate in its wording when insisting on three days a week as part of a “pilot” that begins on September 5, Tesla has taken a more hardline approach.

“If you don’t show up, we will assume you have resigned,” said Elon Musk to his employees in an email in June, demanding at least 40 hours per week in the office.

In contrast, executives at Facebook’s parent company Meta have embraced virtual working as a permanent alternative, with a growing list of its top executives dispersing to different countries and time zones including Adam Mosseri, head of Meta’s Instagram service.

Meanwhile Dropbox, the file-storage company, has declared itself a “Virtual First” company: employees are expected to spend 90 per cent of their time away from the office. At Airbnb, workers can work wherever they want in their home countries, and, for up to 90 days a year, in any one of 170 countries around the world.

Others are taking a more cautious approach. Amazon told its workers late last year that flexible working would be decided upon on a team-by-team basis. It has not provided any more specific guidance since.

Google’s return to the office plan has already suffered several false starts, and the tech group has now resorted to a piecemeal return © David Paul Morris/Bloomberg

Google’s return to the office plan has already suffered several false starts, and the tech group has now resorted to a piecemeal approach.

An internal FAQ page for Google employees, seen by the FT, says staff will be told to return to the office on a site-by-site basis, with a 30-day transition period.

In preparation for the return, Alphabet, Google’s parent company, invited workers who wanted to stay fully remote to apply to management, with feasibility judged on a case-by-case basis. A Google spokesperson said the vast majority of requests for fully remote work, or a transfer to another office, had been granted. It said it had not earmarked a day on which all of its hybrid workers must return.

Adrian Perez-Siam, who worked in Google’s finance team, said he had been earmarked for promotion because of his performance but had his remote working request denied. He subsequently resigned.

“They gave me an ultimatum,” he said. “They felt very strongly about having people in the office. My argument was, if I was exceeding my performance and doing such a good job, I easily could have kept doing my role.”

Those who are accepted would essentially start a new job, with different terms — workers no longer in Silicon Valley would not be getting Silicon Valley salaries. There are other teething problems, said one Google software engineer who, unlike Perez-Siam, was granted approval to go fully remote.

“I feel like I have to constantly prove I am just as productive as the people who are working in the office,” the person said. “It’s common for my manager to blame some of my team’s problems on the fact that we’ve been working remotely for the last couple of years, when in reality, it could also just be because of poor management.”

That is a sentiment noted by researchers at Georgetown’s McDonough School of Business, who studied data gathered from 70,000 home workers and found bad bosses were a driving force behind a desire to go remote. But workers in Silicon Valley should be careful what they wish for, argued associate professor Jason Schloetzer.

“As soon as a company builds the tech infrastructure, or gets used to people Zooming in to meetings, there becomes much less reason for that person to be employed in the United States,” he said.

Other tech companies are ready to attract any disgruntled workers. According to data from ZipRecruiter, the percentage of job openings in the tech sector offering fully-remote conditions has jumped — from 12 per cent in 2019, to 39 per cent so far in 2022.

Among the beneficiaries are companies like Oyster, a HR platform, which helps companies manage remote workforces — including its own. Tony Jamous, Oyster’s chief executive, said the muddled picture at some big tech firms was a “crisis of leadership” due to fears over losing control.

Such comments have become commonplace within the “emotional” conversations around the return — or not — to the office, said Melanie Brucks, an assistant professor at Columbia Business School. She described the plans of tech giants as dogmatic rather than scientific, with a lack of transparency around executives’ thinking.

Regardless, some tech executives in Silicon Valley seem set to push ahead. Real estate trends suggest an enduring, even growing, belief in the physical office, especially among technology companies.

“Tenants can ask for more flexibility on how much space they have, and not have to commit to a 10- or 15-year term to do so,” said Colin Yasukochi, executive director of CBRE’s Tech Insights Center. “There’s still a lot of uncertainty as to what space you need.”