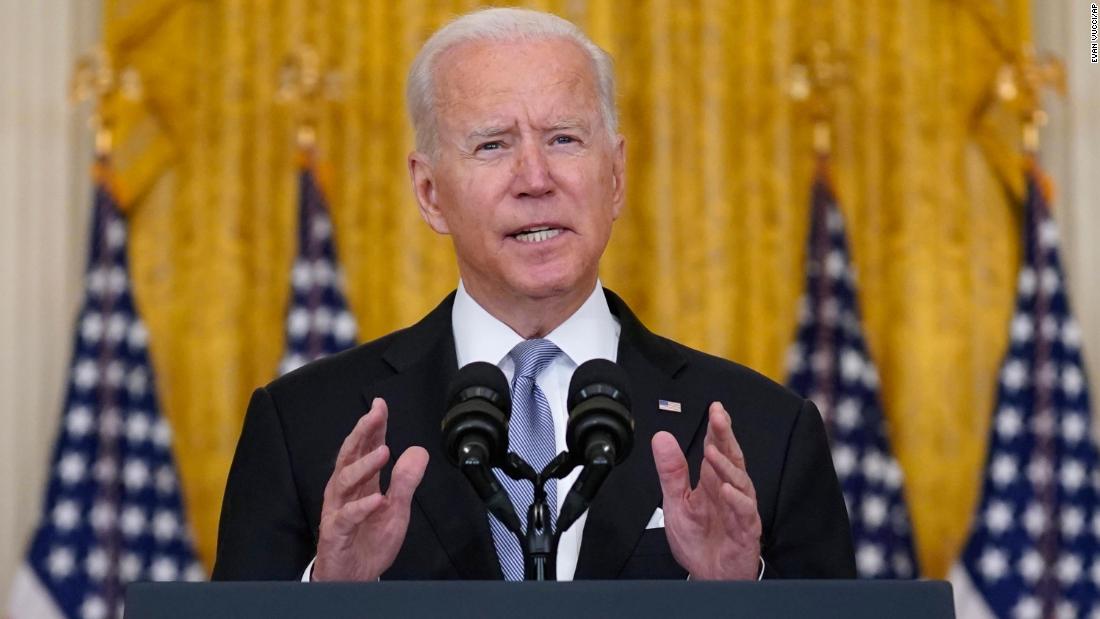 Biden appeared before the world Monday, under rising political pressure, to explain his failure to plan the exit from America’s longest war in the way his constituents and global allies expected — in an orderly, dignified and humane manner.

He is accused of missing the imminent collapse of Afghanistan, of slow-walking the evacuation of Afghans who worked for and trusted America and of overseeing scenes of defeat that tarnish US power in the eyes of the world.

Biden’s defenders have rightly focused on the poor choices left him by ex-President Donald Trump, who negotiated an earlier US withdrawal with the Taliban that cut out the Washington-backed official Afghan government. And mistakes by four administrations led up to a US defeat to a repressive regime, which will send geopolitical reverberations through the Middle East and across the globe.

But Biden is the commander in chief, and the current chaos looks more like an ignominious defeat than an exit with honor.

“I am the President of the United States of America. The buck stops with me,” he said.

Yet as he blamed former presidents — including, implicitly, Barack Obama, whose 2010 surge Biden noted he had disagreed with — for not ending the conflict and the Afghans themselves for refusing to fight for a land devastated by generations of war, the President didn’t really follow Harry Truman’s maxim. Biden instead tried to reframe a weekend of mayhem and humiliation in Kabul. He suggested the choice he faced was between staying for years or decades more — or leaving.

He did admit he had underestimated the suddenness of the fall of Afghanistan after news shows played video of him repeatedly and vehemently dismissing any such possibility.

“The truth is this did unfold more quickly than we had anticipated,” Biden said, but his insistence that he had planned for every possibility was belied by events.

Presumably those plans never expected the exodus that blocked the runways of Kabul’s airport. And Biden’s emergency deployment of 6,000 troops back to the capital in hurried blocks over the weekend didn’t give much evidence of contingency planning.

It’s also easy to accuse Afghans of lacking stomach for the fight from the ornate East Room of the White House, thousands of miles from the trauma and fear of a nation about to tumble back into repression — and where billions of US dollars never succeeded in building a coherent military force.

Biden’s explanations were not sufficient for Rep. Seth Moulton, a US Marine veteran who served four terms in Iraq. The Massachusetts Democrat said history could judge how the Afghan war went wrong.

“But what matters today is the operation that is ongoing in Afghanistan. That is the failure that we are talking about,” Moulton said on CNN’s “Erin Burnett OutFront.”

“That is the operation that we need to fix, because there are thousands of innocent lives on the line,” Moulton said.

That operation is now dependent on the willingness of the Taliban — a US enemy for 20 years — not to interfere.

Biden stood in a camera shot alone in the White House. Unusually, Vice President Kamala Harris was not at his side, nor were top military brass or Secretary of State Antony Blinken.

The choreography might have been intended to show a President looking the American people in the eye. But he also came across as rather isolated, after a weekend at the Camp David presidential retreat, punctuated by a trip to Washington for the speech — and a later return to Maryland to resume his vacation.

The President, normally so empathetic, did acknowledge the “gut-wrenching” scenes in Kabul, and their effect on veterans and the families of those lost in America’s longest war. But most of his speech came across as an attempt to quell the political blowback from a weekend of horrible images.

In fact, Biden spent most of his time arguing a case he had already won with the public: the need to leave Afghanistan.

“How many more lives — American lives — is it worth? How many endless rows of headstones at Arlington National Cemetery?” Biden asked.

In essence, the President is relying on the American public’s desire to leave Afghanistan to paper over his mismanagement of the departure. His instinct might be correct. While Republicans are seizing on the debacle to portray Biden as an inept and weak leader, no one is likely to run for president in 2024 vowing to send US troops back to foreign battlefields.

More awful footage — like the Afghans falling from planes — will increase political heat on the President. He may not have escaped his Saigon moment — with helicopters lifting off the US Embassy just as they did in the frenzied final hours of the Vietnam War. But if he can avoid a “Black Hawk Down” parallel — the loss of 18 US soldiers on a humanitarian mission in Somalia in 1993 — his current political position could hold. Even in that incident, which exposed a new commander in chief, Bill Clinton, to withering criticism and prompted the withdrawal of US troops, the political heat eventually subsided, and Clinton won reelection.

In an earlier episode that appeared politically devastating to US power at the time, President Ronald Reagan withdrew US forces from Lebanon, months after a suicide bombing on a US Marines barracks killed 241 members of the armed forces.

Biden will remember both dramas, as he was a senator at the time.

There is also a question whether the blanket coverage of the Afghan withdrawal — driven largely by Washington media, lawmakers, experts and officials who have lived with the war and its policy twists for 20 years — is widely shared.

“I stand squarely behind my decision,” Biden said in a nod to voters outside Washington who tell pollsters they back his decision to end the war.

One wider political threat to Biden is the possibility that the Afghan calamity could spawn a wider narrative of failure surrounding his presidency. Biden has had a strong domestic start to his administration, signing a massive Covid-19 relief package into law and advancing infrastructure spending in the Senate.

But Republicans — encouraged by endlessly self-serving statements from Trump — are seeking to build a picture of a hapless President, weak abroad, under siege from flows of migrants rushing to the border and overtaken by the pandemic. Trump, for instance, accused Biden on Monday of “surrendering” to the Taliban and Covid-19.

It was a deeply hypocritical attack given Trump’s neglect of the health emergency and his own courting of the Afghan militia while in office. But it doesn’t mean that a damaging impression of Biden’s capabilities will not take hold among some voters.

And the President’s own missteps could undermine his strengths. He has portrayed himself as a fixer of American problems. He’s the American President standing up for democracy — and he just left a fragile Afghan democracy in ruins. His declarations that the US is back are undercut by a public retreat.

And if the Taliban again welcome terrorists targeting the United States, all the political bets the President laid on Monday — after pointing out that the US had crushed al Qaeda more than a decade ago — are off.

“If what happens in Afghanistan is a return to a safe haven for jihadists, Islamists, then the images we see today will be an albatross around the legacy of Joe Biden forever,” Timothy Naftali, a presidential historian at New York University, told CNN’s Burnett.

“If the Taliban of today are somehow different than the Taliban of the 1990s … then perhaps this chaotic end to our 20-year odyssey in Afghanistan will not seem like such a horrible finish.