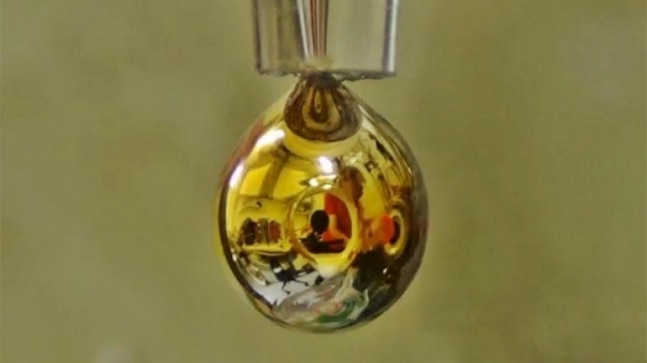 Alchemy has remained a tale of myths and folklore, where one could convert the properties of matter, mostly from metal into gold. Not for long, researchers in Prague achieved the feat when they formed a thin layer of water around electron-sharing alkali metals. Although, just for a few seconds, it was made possible without the high pressure and temperature that is generally required.

It is possible to make insulating materials metallic by applying pressure, and for converting the property of water it requires a pressure of 48 megabar (over 4,73,72,316 atmospheres), which is currently beyond current experimental capabilities.

Such high pressure can only exist in the interior of large planets or stars, where molecules can be packed so tightly that they begin to share their outer electrons, which can then conduct electricity. Physicists are of the opinion that Neptune or Uranus host water in such a metallic state that it becomes a superconductor capable of conducting electricity.

However, at the Czech Academy of Sciences in Prague, researchers succeeded in keeping water in a metallic state for a few seconds. The experiment did not require the high pressure that is sought to convert non-metallic materials into metals.

The research published in the journal Nature, states that experiments indicate that water at pressures accessible in the laboratory will at best be superionic, a phase of water that exists at extremely high temperatures and pressures where water molecules break apart, with high proton conductivity, but not metallic. However, researchers show that a metallic water solution can be prepared by massive doping with electrons.

The researchers developed upon the works of co-author of the study Pavel Jungwirth, a physical chemist at the Czech Academy of Sciences, who had last year demonstrated a similar effect in ammonia. According to Nature, the team faced a challenge, alkali metals tend to react explosively when mixed with water. The solution was to design an experimental set-up that would dramatically slow the reaction so that it would not be explosive.

Researchers used a mixture of sodium and potassium, which is liquid at room temperature and placed it in a vacuum. A syringe was used to form droplets of the mixture, exposing it to small amounts of water vapour condensed onto each droplet and formed a layer one-tenth of a micrometre thick.

“Electrons from the droplet then quickly diffused into the water — together with positive metallic ions — and, within a few seconds, the water layer turned golden,” Nature reported.

The research was confirmed by a synchrotron, cyclic particle accelerator, in Berlin that corroborated that the gold reflections produced had the signatures of metallic water. “We were not sure at all that we would find it. It was amazing, like [when] you discover a new element,” Nature quoted Jungwirth as saying, who termed the chemical development as a highlight of his career.