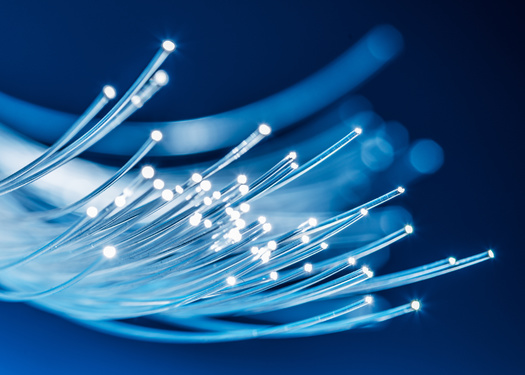 Groups that promote the responsible deployment of technology are celebrating the Biden administration’s new $42.5 billion Broadband Equity, Access, and Deployment program because it favors fiberoptic technology over broadband communications technologies such as cable, satellite, DSL and wireless.

“You’ll be able to do things like smart-grid modernization, public safety, and even advanced services like 5G,” said Bolton. “So having this near-limitless capacity is going to really close the digital divide once and for all.”

The National Telecommunications and Information Administration aims to ensure that all communities, including underserved low-income rural areas, have high-speed broadband so they don’t get left behind in the digital economy.

The funding for the broadband rollout comes from the Bipartisan Infrastructure Law.

“We’re beginning to understand that it has biological impacts, even at levels far below what the government considers safe,” said Wood. “So, it seems like an unwise decision to start installing wireless antennas and wireless broadband and communities across the country.”

Proponents of wireless technology say their products are safe. On their blog, the wireless company Ceragon argues that fixed wireless solutions are dependable, have higher bandwidth, and are faster and cheaper to deploy and maintain.

The percentage of Colorado children in their first 15 months receiving preventive medical and behavioral health services rose by 23% from 2013 levels, and stayed constant during the COVID public-health emergency – according to new data released by the Center for Improving Value in Health Care.

But Dr. David Keller – a pediatrician and professor of pediatrics at the University of Colorado School of Medicine – said that was not the case for many children aged three and older who missed out on regular screenings.

The focus of visits for kids age three and older is kindergarten readiness – making sure they are developmentally equipped, and screening for mental health to ensure children are in the best head space to succeed.

Those visits dropped significantly between 2019 and 2020 at the start of the pandemic. Keller added that school disruptions created even bigger mental-health problems for teenagers.

Despite overall positive trends, in 2020, 40% of children 15 months and younger did not receive the recommended six or more well-child visits with a primary-care provider. Kids covered by commercial health insurance did better than kids covered by Medicaid.

Keller said making it to appointments can be especially challenging for families struggling economically.

Children in rural parts of Colorado had similar visit rates compared with urban kids, even though there are fewer providers and families have to travel greater distances.

Keller said most families have a lot on their plate, and it’s easy for wellness visits to slip down on their list of priorities.

“One of the things I love about being a pediatrician is that I get to actively practice primary prevention,” said Keller. “There’s so much we can do to help families help their children be the best they can be. And that would be my best message, is: Come on in, we want to see you.”

A new network of COVID-19 vaccine clinics is now open – located in Latino churches in nine cities across the country, including one in Nevada.

The clinics are part of a collaboration between the Hispanic Access Foundation and a federal agency called the Health Resources and Services Administration.

Andres Almanza Cañas is the associate director of the vaccine program at the Centro de Adoracion Familiar in Henderson, which is holding its next clinic on Tuesday, June 14.

“Many in the BIPOC community aren’t getting vaccinated because of lack of transportation,” said Almanza Cañas, “as well as a lack of access to education and proper knowledge that doesn’t come from erroneous social media posts.”

A recent survey from the Kaiser Family Foundation finds that 47% of Latinos have received at least one vaccination shot, and that quite a few people – particularly from families with mixed immigration status – fear having to give their personal information to health authorities.

David Armijo, chief of programs with the Hispanic Access Foundation, said many people feel more comfortable getting the shot at the church – somewhere they know and trust.

“Many of them had not come because they had a fear that they wouldn’t have material in Spanish,” said Armijo. “They’d have to fill out information, they wouldn’t have a translator. So being able to provide these clinics in heavy Latino areas has been a big success.”

The clinics in this program will run through August. The other eight clinics are in Arizona, Connecticut, Illinois, New Jersey and Texas.

Health care workers at an Oregon hospital are calling for more support as short staffing takes its toll.

More than 100 members of SEIU Local 49 at Samaritan North Lincoln Hospital on the central Oregon coast are at a standstill in union contract negotiations with the hospital. The workers include emergency-room technicians, respiratory care practitioners and radiologic technologists.

Rachel Eggleton, a certified nursing assistant (CNA) at the hospital, explains the pressure workers have been under.

“Being alone as a CNA at night having nine patients, it’s too much,” Eggleton contended. “Everybody is important but of course some of them, they need more time, but it’s almost impossible.”

Over Memorial Day weekend, Eggleton and other SEIU Local 49 members rallied for negotiations to continue. Their biggest concerns are pay, staff retention and access to a union education fund to further their careers. In a statement, Samaritan North Lincoln Hospital said its wages and benefits package are competitive with other hospitals across the state and that it’s proposed across-the-board wage increases over workers’ three-year contract.

Starting pay for a CNA at the North Lincoln branch of Samaritan is just under $16 an hour. Eggleton pointed out her youngest daughter is making nearly as much as her at a fast-food restaurant without any training, adding it has been hard to keep up with the increasing cost of living in the area.

“We need a hospital that will attract quality employees that would want to stay,” Eggleton emphasized. “Because right now a lot of our employees are leaving because they just can’t afford to stay in Samaritan hospital anymore.”

Eggleton noted starting pay at other Samaritan hospitals for a CNA is more than $3 higher. She wants North Lincoln to align itself and negotiate with the other Samaritan care centers.

“We’re all held to the same standards, we’re all doing the same jobs, we’re all hardworking people,” Eggleton asserted. “So why does North Lincoln hospital have to be paid less?”

Disclosure: SEIU Local 49 contributes to our fund for reporting on Livable Wages/Working Families, Social Justice. If you would like to help support news in the public interest, click here.