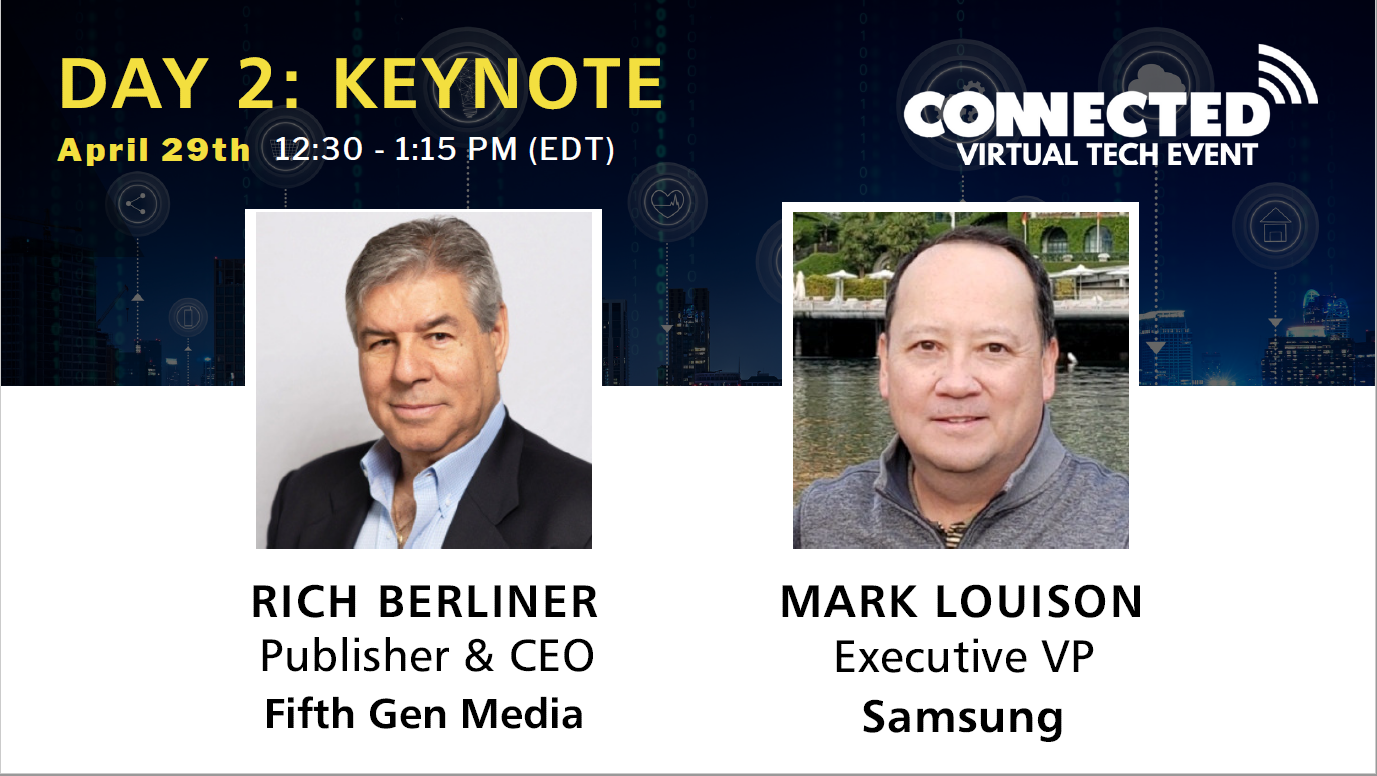 Rich Berliner: You mentioned that you first graduated from college and then you had to build a house. So were you weren’t real on firm footing until you had your own house, which took a year and then you took a job with Panasonic. Tell us about that.

Mark Louison: I got out of college in the early ’80s and it was difficult in the financial world, as I remember it. Malcolm Forbes was the graduation speaker and the whole commencement speech was about, making your own paths. So I got out of school, built this house up in Green Township, New Jersey, lived the American dream, got off to a great start with that. Then I started thinking of how I was going to pursue a career path and there were a couple of obvious things I could do but, at the time same, there was this new thing coming which was called cellular telephones.

I remember my father saying, ‘Phones that go in people’s cars, are you kidding me? Mark, does this company have a pension. What is this all about?’ It was interesting industry to me. People didn’t really know where cellular technology was going to go. If you remember, the old AT&T long distance company, they were given a nationwide wireless license by the government and they did an analysis and it said that, at the peak of maturity of the market, there would be 900,000 cellular subscribers. So I got into it before 1G.

Rich Berliner: What was your thought process as far as you couldn’t sell these things forever, every five minutes the generation was changing, people that have transceivers that are bad and needing handsets? Selling phones back in those days was kind of a logistical obstacle. How did you see the marketplace unfolding for you?

Mark Louison: It was a heady time. This industry was really growing fast. It was changing all the time. The only mistake you could make was not taking action. If you were willing to take action, then, in my case, I think I wasn’t smart enough to not know any better, so I would just take action and one thing led to another in the career. I went from Panasonic and I ended up at Bell Atlantic Mobile Systems, which is sort of the core company that became Verizon Wireless and worked there for a while.

I went out to Seattle and worked in a telecom software company, which then had me over in Japan. I came back to the U.S. and started working for Nokia Networks back in the days when it was still just Nokia Networks and, over time, that was running the all day AT&T Wireless account and went from that to running Nokia Siemens Networks in North America and then being the President of all of Nokia’s businesses in North America. And I’ve been now at Samsung for about seven years.

Rich Berliner: You’ve built a terrific team and it’s not just eight guys in a room somewhere. You’ve got a huge amount of people here and they do a phenomenal job. So how were you able to build that team? Is it sort of a team in your image or is it a team of people completely different then you?

Mark Louison: I had the luxury here because we’ve been building this organization over the last seven years to really be able to bring in some of, what I consider to be, the finest people in the industry. I don’t think any organization wants everybody to be the same because you get ‘same-think.’ We’ve been thinking that way at Samsung for a long time. This driving diversity of thought experience is incredibly important and this team really has that ability. If you just look at what’s going on in the industry and look at the achievements they’re making, I’m honored to be their leader. We’re really doing some incredible things.

Rich Berliner: Did you have to pull the overcoat on kind of tight early on before there was any real orders here that you were building something, and yet it was a little chilly because nothing had happened yet? But at the same time, you were building this organization and, if the orders didn’t come, there could be some agita there. How did that feel?

Mark Louison: There are enormous (Research & Development) investments that need to be made. You need to build a support organization. You need to have a leadership team out in front. And so you don’t enter into those decisions lightly. But I think the great thing about Samsung is, once we decide that we have the technical capability, financial capability and an underlying infrastructure, it allows us to do that and not be worried about that—just be confident. Certainly not everything happens exactly in the timing you want and there’s other obstacles get put in the way. But, I think, like pretty much everything, we just very persistent, got a lot of grit, lot of determination. So I don’t know that we ever dwelled on it.

Rich Berliner: One of the interesting things about the way you’re selling is that, if I called up a carrier and said I want of (Samsung’s products), often times they will say, ‘I don’t know what you mean.’ It it difficult not being able to talk with the customer directly in those situations where you have great products but it’s not, you’re sort of behind the scenes on those things?

Mark Louison: We build products that we sell to operators and now an emerging part of that are to enterprises. We’re one step removed from the ultimate person who’s using the product. But, at the same time, I think this is part of Samsung’s DNA, we’re f maniacally focused on the customer experience. So we get, we do get a lot of data about those kinds of products, about any of our products we use, about how they perform and we improve them. Then each operator has a different way of thinking about how they whether deploy their network. Those products have served a very important place in that overall sort of big network picture.

Rich Berliner: Your in-building products are an important part of the eco system at this point in time. Did you view that as something that we must have this as part of what we do or was it, ‘Look, we’re making bay stations anyway, it’s not that much different to make in-building gear? Which side of the equation was that?

Mark Louison: Our primary business was always building these large wide area macro radio networks and that’s been the game. You build as much coverage as you can over as large a geography as you can. That’s always been there.

The when you start thinking about how you go into these indoors or other kinds of venues, that wide area of coverage is not going to be sufficient, it just won’t—laws of physics, economics, etc. If you back though, a lot of that requirement was kind of solved by Wi-Fi. Wi-Fi had been out there. It’s a fairly ubiquitous well-known thing.

So we had some small level of indoor solutions as you were describing but it wasn’t that big a thing. What’s happened over the last few years is that that’s really kind of changing and the reason it’s changing is that, while the latest generation of Wi-Fi is quite good, it’s not really robust enough to meet super high-end means of these evolving enterprises. When you go to a cellular-like technology, you’re getting a much better through put latency quality of service that the end users are going to demand. Based on that sort of shift that Wi-Fi’s not good enough for a lot of customers, we said that we needed to start investing in and building out our own portfolio of products.

Rich Berliner: It seems to me that it’s absolutely logical for you to be in the in-building space because that’s where people are trying to use the Samsung phones that you make and it’s not remarkable that people want to be able to make calls and do data inside? I just think it’s such a natural situation that’s part of the eco system at this stage.

Mark Louison: Yeah, I think it is. Users are demanding it. This providing a higher quality of service may be then, because Wi-Fi is necessarily not good enough, that’s another part of it. Some larger users want to have control over their own network for a variety of reasons, so hence you see lots of discussion around private networks.

I would add that it’s not only these data sessions that are being initiated from inside the building more than 80 percent of the time. It also represents probably a same sort of proportion of the traffic that a lot of it is almost stationery usage, at best what we’d call nomad, which means someone’s walking around, maybe on a campus or within a building. So you also have that piece as well. The mobile traffic has stayed pretty much consistent.

Rich Berliner: I read in the news about money being given out as grants for 6G experimentation. Apple has been hiring 6G engineers. What’s your take on 6G? Could you be a futurist for us?

Mark Louison: You have the ’80s,’90s, 2000s, the 20-teens and now we’re in the 2021. We’re at 5G. It’s about a decade. Each of those G’s has been about a decade. Back in 1G they actually spent about 25 years doing the research in Bell Labs to prepare for 1G, right. Now, I mean, if you look at 5G, we started work on 5G eight to 10 years ago and it’s really only in the whatever, the first, it’s the first inning of the nine-inning ball game, right. So I think what that means is, it’s the early days of 5G. This is going to be around for a long time. By the way, 4G also has a very long tale here.

People need to start investing in the early R&D for 6G. We’re doing the same. We have a massive R&D in machine and we’re always looking at what those new generations are going to be because that’s predicting how the technologies evolve is how you maintain and gain market share.

Rich Berliner: It seems that one of the real benefits that Samsung has is the end-to-end piece of this. In other words, you make the chips, the phones, the network gear etc and there is one place to go for the customer. That end-to-end piece that seems to me to be an incredible value in the eco system of all of this, of all the things you’ve talked about of going from electrons to bits of data managed by software. It seems like you’ve got, you’re in the catbird seat and having those things as an advantage from literally end-to-end. Do you see it the same way?

Mark Louison: Absolutely. It was one of the personal reasons I was so attracted to Samsung all those years ago, right, from the ability to invest in the R&D, building, having the access and managing silicon the way we do, semi-conductors all the way through the different kinds of devices and gear we build. We build a half a billion connected devices a year we sell, right. That’s a huge advantage for us.

The question is what do you do with that advantage? How do you act on that in the market to really create value? We maniacally go back to that, how do customers use these products and how do we provide better experiences? So all the stuff’s great but, if you don’t activate it that way, it’s less useful.

Joe Dyton can be reached at joed@fifthgenmedia.com.