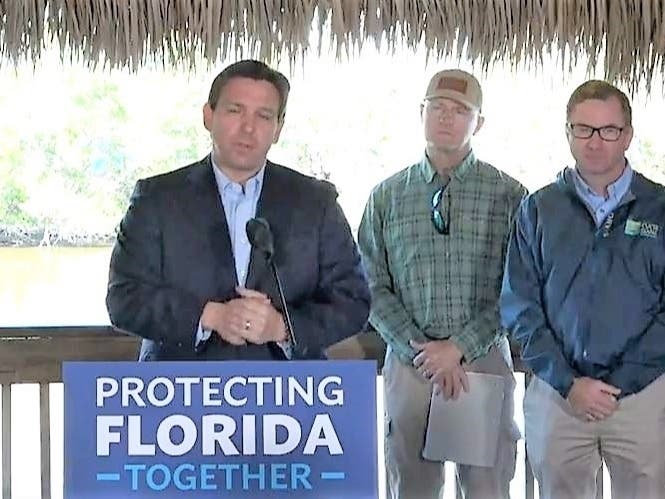 FLORIDA — The continuing population boom in Florida — 737,945 new residents moved to the state between April 2020 and April 2022, lured by warm weather, lower taxes and fewer regulations than other states — has conservationists worried about overdevelopment and the destruction of the natural habitat.

Exactly four years after signing his first executive order in Bonita Springs pledging to fund a laundry list of environmental initiatives including restoring the Everglades and preserving wildlife corridors, DeSantis returned to the southwest Florida city to sign another executive order that will pour more dollars into conservation efforts.

“Four years ago today, I came down to Bonita Springs and announced we were going to bring about a new era of stewardship for Florida’s natural resources,” DeSantis said during a news conference Tuesday. “I’m happy to say we delivered on the promises we made four years ago.”

The Everglades Foundation CEO Eric Eikenberg remembers that day well. He said DeSantis had just taken the oath of office less than 48 hours before visiting Bonita Springs. Everyone was surprised when the Republican governor announced that he was allocating $2.5 billion for environmental projects, $1 billion more than was allocated during the previous four years.

DeSantis said the state actually spent $3.3 billion on environmental initiatives during the past four years, including $1.7 billion on more than 50 projects to restore the Everglades.

“Now Gov. DeSantis has cemented himself as the Everglades governor,” Eikenberg said.

Another $1.6 billion went to water quality and supply improvements, including converting septic tanks to sewer service.

See related story: It Began With A Bear; Now 36,445 Acres Are Preserved In Florida

Additionally, the Florida Legislature passed the Clean Water Act and the Florida Wildlife Corridor Act, which funneled $600 million toward the purchase of more than 170,000 acres of conservation land.

But DeSantis said his reason for visiting Bonita Springs Tuesday wasn’t to gloat over his accomplishments. Instead, he said he came to announce that he isn’t finished.

“I’m here to put it into a higher gear and build off our progress and success by signing another executive order to ensure we continue our historic momentum and preserve Florida for future generations,” he said.

With that, he declared that he is pledging $3.5 billion to continue his environmental efforts for another four years.

That money will go to restoring the Indian River Lagoon — the most biologically diverse estuary in North America, addressing stormwater and agricultural runoff, reducing harmful discharge into the Everglades, continuing to acquire property for the wildlife corridor, preserving additional land for Florida’s wildlife corridor, launching a coral reef restoration and recovery program and funding research into fighting the impacts of red tide and blue-green algae.

He said money also will be used to make communities more resilient to weather impacts, such as the severe beach erosion seen on the east coast after Hurricane Nicole made landfall.

DeSantis said Tuesday’s Executive Order 23-06 (Achieving Even More Now for Florida’s Environment) will surpass “historic investments of the past four years, making it the highest level of funding in Florida’s history. I think those dollars are very well spent.”

DeSantis said his laissez-faire policies that led to criticism by Democrats during the pandemic was the economic engine that allowed these environmental programs.

While other states were shut down during the pandemic, DeSantis allowed businesses to continue operating. He said this hands-off approach resulted in more tourism and enticed businesses and residents to relocate to Florida.

Florida now ranks as the No. 1 destination for Americans looking to relocate to a new state, according to Globest.com, which analyzes national real estate trends.

“It’s crazy the number of people down here at any given time, and not just visiting, but moving here,” DeSantis said.

That influx of tourism, new residents and businesses resulted in a $450 million budget surplus, he said.

“That would not have happened if we had turned Florida into a Fauciville,” DeSantis said, referring to former chief medical adviser to the president, Anthony Fauci, who urged business and community shut-downs during the pandemic.